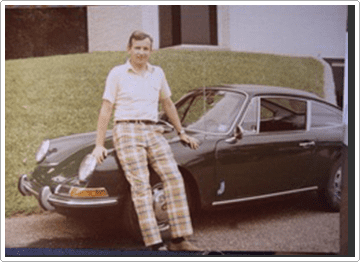 ~2004 being rejected by all the body shops, I learned to paint using PP&G paint instructions. See 2nd Photo below of an after paint photo.

May 2013 Helen started driving a Tesla Model S-60 all electric. I was green with envy.

I started my research into electric cars being built, written, and talked about in California..While in California I stopped by the manufacturer, HPEVS, of the motor that I planned to use.

They had done the conversion I had been thinking about. They had mated it with a controller that converted Thomas Edison's 150-170 VDC to170 Volts Peak to Peak 3 phase, invented by Nicolai Tesla.
9/26/15 - Bob - weight distribution

The weight of the motor, controller, batteries, wiring, control gear replaced an equal weight of the Porsche Internal Combustion Engine, ICE, gas in tank, oil, electric ignition. The weight replaced was about 600 lbs. Before the weight distribution was front/back 30%/70%, not good from an auto engineer's view. Now it is 50/50, good.
I frequently drive it daily. It has a range of 60 miles. as of 7/20/16 it runs nicely, but still has the appearance inside of a high school electronics project. I tinker with it constantly.

everything I can remember.
From 2003 until 2013 I drove daily my favorite car, a 1967 Porsche 911, purchased from a family friend who wanted the just then announced longer wheelbase 911 model. Starting in 2013 during a 15 month period I converted the Internal Combustion Engine (ICE) to an Electric Motor (HPEVS AC-51). I still drive the car every day. I have a smile on my face having fun thinking and still tinkering after 46 years of driving my favorite. 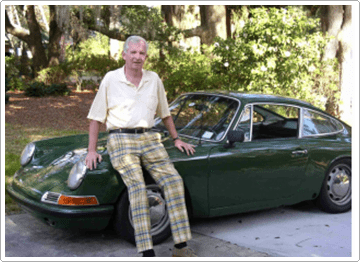 The engine in approximately 1972 blew an exhaust valve. Stoddard Porsche in Cleveland fixed and also fixed rusted panels under each door. I had thought that I was the one to do the fixing of the engine but judiciously realized I did not have the time, nor did I want the learning experience of fixing a serious problem in a complicated engine for the first time.

I continued to drive approximately 10,000 miles per year over most of West Virginia where my business, a personally owned/operated computer hardware/software/service company, took me for sales and service customer tasks. Since that time I have personally done all of the maintenance that did not involve welding.

I replaced the muffler probably 4 times. I replaced the stainless exhaust headers twice. I replaced the rusted panels under each door several times. I replaced a broken rear torsion bar, shock absorbers, plugs, oil tank, fuel pumps, gas tank, head liner, rugs. I cut out front rusted bumper mounts along with a other rusted trim. I encountered the infamous splash oiled valve timing chain VERY Loud clanking noise and replaced chain tensioners on both sides. My final conclusion on this matter is that replacement of either chains or tensioners was unnecessary, Installing shims on the tensioners to prevent total collapse, like many racing buffs have done was the real solution.
I had it painted every eight or so years. I re-upholstered the seats, rugs. During one of the several under pan surgeries I replaced the central rear steel tube supporting the transmission and rear suspension. It had rusted from the inside and gently settled the chassis to the rear suspension stops..

I replaced the under steel paneling holding the front suspension twice when it showed rust which would have resulted in Trouble.
The speedometer has turned over two times indicating over 300,000+ miles. The electric clock original electric solenoid spring winding mechanism got to the point of sticking and discharging the battery, so I had a California instrument company replace the clock mechanism with a "modern" low current drain replacement powered by a 9VDC battery and/or the 12VDC battery supplying lights, radio, etc.. 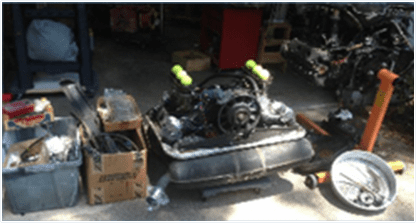 The running 2.0 Liter original engine was removed by putting a 4 wheel dolly under the engine,
After disconnecting the gas line, filter, electric ignition, clutch cable, Speedometer cable, Oil lines, Oil tank, exhaust, and air valves for heat I disconnected 2 rear bolts at the back of the engine connecting the back to the chassis. I disconnected the transmission at the front bolted to the chassis 3" diameter cross-member with 4 bolts. I then lowered the engine down to the dolly to which it was secured. I then lifted the chassis up about 2-3 ft so I could roll the engine on its dolly to await it's new owner.. I used a 2 ton hydraulic arm lift.

This photo was taken shortly after I painted the 911. I tried sanding and chemical paint removal. Too much paint too little time. I used a hand grinder with a plastic-like 4" buffing tool (I WORE OUT 10 of these plastic-like buffing tools.) which worked like a charm. I removed all paint down to the raw steel, and quickly primed the raw steel to keep a thin layer of rust which formed within hours of being bare metal here in SC. I called PP&G paint info and got the color # for Porsche 911 in 1967. It was xxx/"Irish Green". I also obtained very precise painting instructions from PP&G. My paint instructor, an employee of the shop whose owner told me after examining the old paint jobs and the uncertainty he felt by saying to me, "Bob, today we are friends. If I paint your car we are not going to be friends". I said, "OK If you won't paint my 911 you have to teach me how." He pointed to the "Paint Building" and said Joexxx will teach you everything you need to know. Have at it."

He did, I did, (only one do-over" and you see the result in the photo to the left. 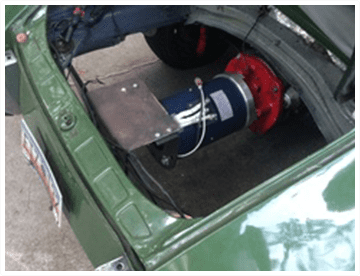 Before I pulled the ICE I assembled on a bench the motor, adapter, transmission, Curtis Instruments 1239 DC to 3 Phase AC controller, 48x3.2VDC Lithium Ion battery back, and Elcon 3kw 1120/240VAC to 150-170VDC battery pack charger. (Include photo) This rig worked on the bench allowing me to test the 156VDC battery pack driving the motor connected to the transmission, controlled by the Curtis Instruments 1239 DC-3 Phase AC controller.

The "should I or should I not use" question of the necessity of a Battery Management System (BMS) needed to be addressed. Also though a graduate electrical engineer I had no concept of managing a 48 cell string of serial connected Lithium batteries, so I elected initially to not have a BMS.

Bad decision! I also had no concept of the importance of initially balancing ALL the cells to the same voltage before I performed a battery pack charge. Before I cranked up the ~160VDC 3KW Elcon Pack charger I used a hobbiest type 4 cell "Lithium Ion Battery charger to charge 4 of the 3,2VDC nominal Lithium battery cells in series. They charged routinely up to 3.6VDC each and the hobbiest charger safely stopped as it was supposed to. Ok now why not put these 4 cells back in series with the other 44 cells, 3.2VDC, from the factory and charge the whole bunch up to 3.6VDC. Newbie mistake #1. When I did this it wasn't long before the 4 cells starting at 3.6VDC moved into the "greater than max VDC value of 3.6 and started spewing gas and fluid out of the pressure release valves installed by the battery manufacturer. I was out of the garage for about 15 minutes while this was going on. When I returned and smelled/saw the problem I disconnected the charger, opened up the garage doors to clear the vapor, caused by the 4 cells already maximally charged being overcharged, and returned to the drawing board to reconstruct the obvious now error and to immediately order an Orion Battery Management system.
In the aftermath I re-read multiple times the "Battery manual" from CALB, (China Air Lithium Battery), the supplier. The message was clear about not over-charging and not over-discharging. The manual did advise to use a battery management system (BMS). However CALB's own offering did not include a BMS that would handle a string of 48 cells, so I concluded that I might get started without a BMS.

I am not making excuses for my inexperience in serial battery pack assembly, because it is obvious that inexperience was the source of the mistake in overcharging 4 cells, killing the 4 cells. The CALB manual was probably written in Chinese and translated by a computer and never audit/edited by a multilingual Chinese/English engineer. If you read the supposed documentation on the internet even today, 2 years later it is obvious that this manual is still minimal.

First item installed in chassis using old engine mounts and horizontal steel bridge for rear electric motor mounting. Red Adapter from motor to transmission. Inside the adapter the flywheel is fastened to the rotor axle of the motor. The clutch and the pressure plate are aligned with the centerline of the drive shaft from the transmission. Once aligned with a centering plug, I fitted the transmission through the adapter, pressure plate, clutch, and flywheel pointing at the center of the rotor axle of the motor. 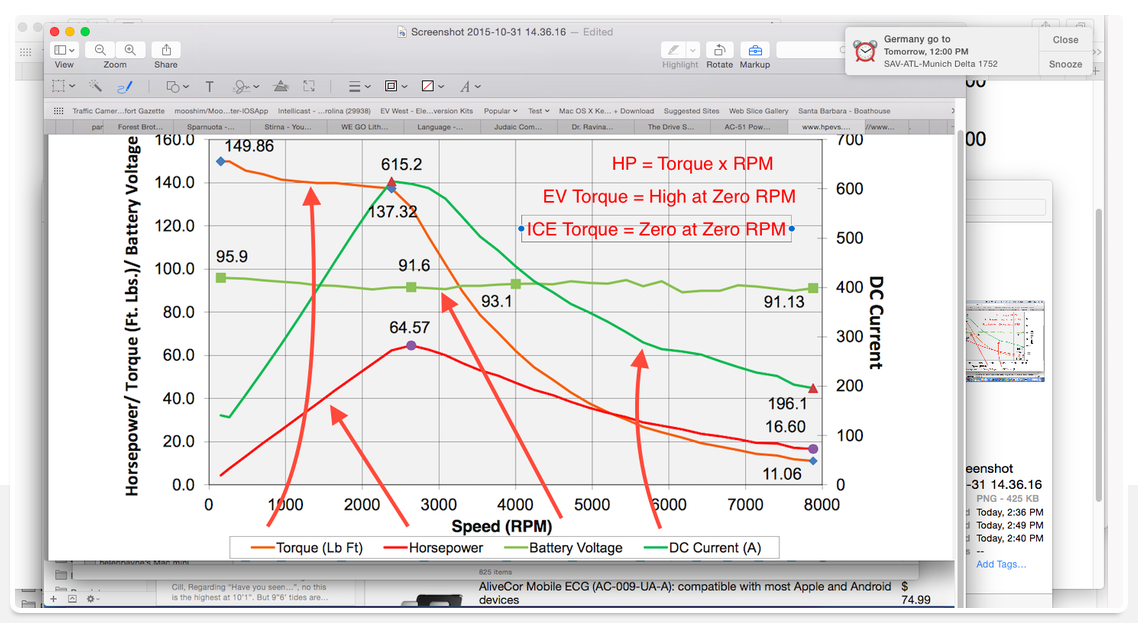 This is the Porsche 901 Transmission connected to the HPEVS motor using the red adapter for the bench test of the assembly before installing in the chassis.

Test drive '82 911 built by HPEVS, Investigated Suppliers of motor, controller, batteries, charger, books on EV, and advice from all of the above.
Decided on and ordered AC motor/DC-3 phase, controller to convert Battery Pack >48VDC, Lithium Ion batteries, and Battery Pack charger. cost ~ $12K.
Bench tested charging 48 LIon Pack x 3.2.VDC = ~155VDC. Destroyed 4 3.2VDC cells due to not understanding initial balancing of Lion batteries individually, group of 4 out of a group of 48. I took bad advice to "Not need aBattery Management System". Getting educated the hard way I ordered a Battery Management System (BMS) system and learned from that documentation and from "Tech Support" what I needed to know about Lithium Ion batteries. Cost ~ $1.2K. Unrecoverable damage ~ 4 x $170 = $680.

The bench test was completed around October 2014. The 15 month time frame without age related surgeries would have been about 2 months.
Removed ICE, everything related to gas and oil. Installed 3 phase HPEVS AC-51 motor along with a Curtis Instruments converter fitting the motor to the transmission including a new Porsche 911 Flywheel, brake disk, pressure plate using existing 901 transmission and a 6"x6"x8" steel angle fitting the rear motormounting plate to the original ICE mounting plate secured conventionally to rear two engine mounting points. See pictures before and after. Installed 48 7.5lb batteries, in 4 wooden crate boxes. Two are mounted in the 2 jump seats behind the passenger and Driver. The other two are mounted in the front trunk. The batteries are in a series form with a 500 Amp fuse and a 500 Amp remote mechanical disconnect protecting the pack on the plus + side of the pack. The Curtis Instruments DC to 3 Phase controller with 12V supply driven logic. A 170VDC to 13.5VDC converter to keep a group of 12VDC conventional lead acid batteries charged so they may supply logic power to the motor controller, accessory power for lights, radio, clock windshield wiper, etc., and the BMS. 12VDC to 19VDC converter to provide power to a Dell laptop to be able to use Orion BMS very detailed monitoring of the batteries, charging, and discharging process.